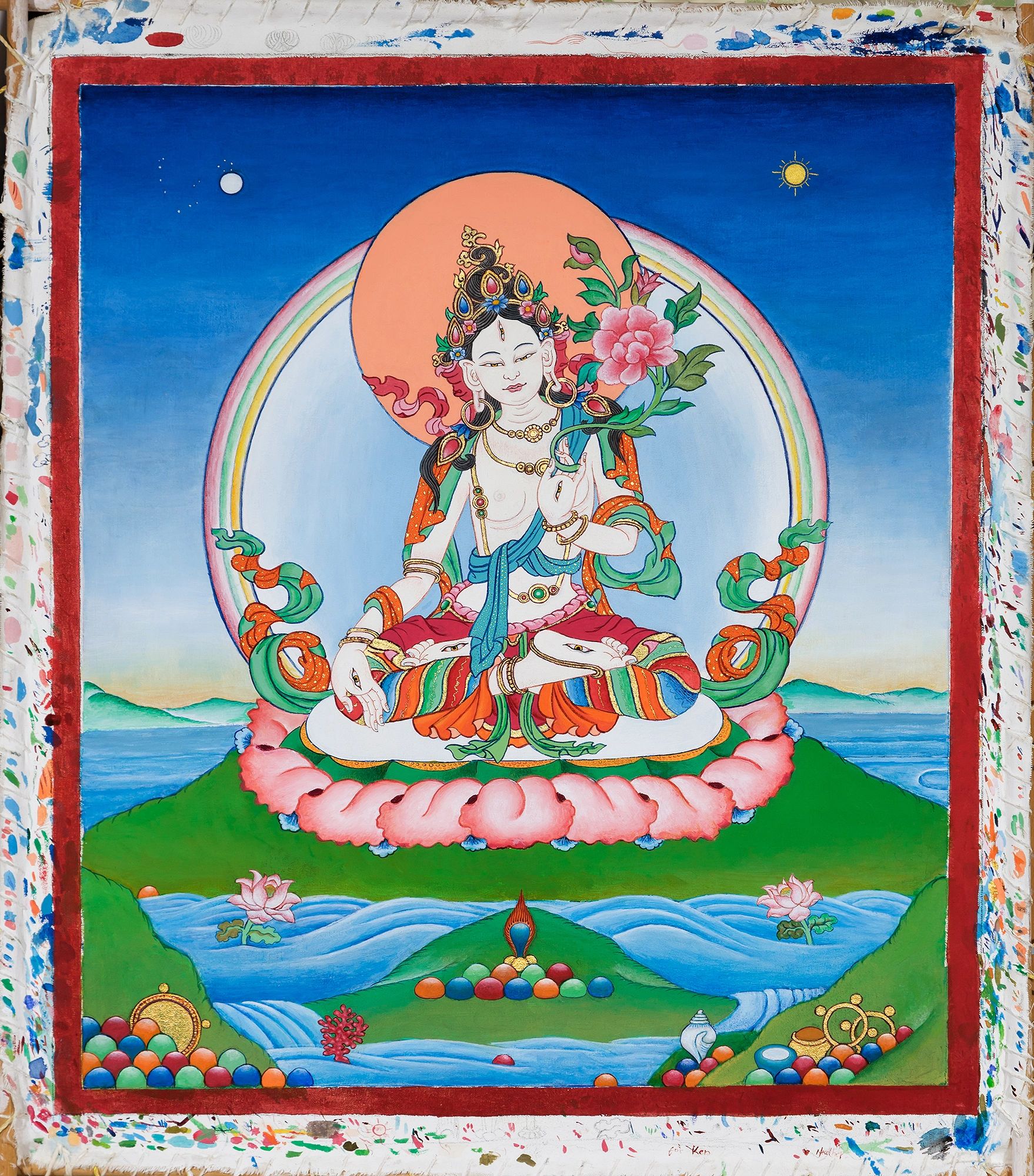 Slidshow of completed thangkas White Tara, Nor Terma and Mandala of the Five Elements

Detailed information on the portfolio paintings

collage of photos and a small portion of my artwork

a little bit about me and both of my thangka teachers

In the collection of Ken Halvorsrude

Prints available with all proceeds going to Ngakpa International

She is the remover of health obstacles and the giver of long life. She has seven eyes. There is a third eye in her forehead, and four more in the palms of her hands and the soles of her feet. These symbolize her ability to see whatever is ailing whomsoever and wheresoever. Her right hand extends downward with the open palm forward in the boon-granting or more literally “giving of her best” gesture. The two flowers in front symbolize the benefactors of the painting Ken Halvorsrude and Valerie Acuff.

When anyone is sick they only have to recite her mantra  Om tare tuttare ture mama ayuh punye jnana pushtim kuru soha  to remove any health obstacles.

She is the 11th of the 21 Taras, the female buddha.  Her right hand holds a golden vase of nectar which rescues all beings from any type of poverty, such as money, friends, health, but most painful is the lack of compassion and knowledge of the dharma.  She eliminates and purifies all obstacles and any negative imprints to receive and hold and become treasures of the dharma and any material concerns are satisfied and miserliness removed.  As with all dharma she works on the energetic level, which then shifts and manifests in the material form we are currently alive in.

Mandala of the Five Elements

The philosophy of the five elements formed the basis for Indian Ayurvedic Medicine which later was incorporated in Tibetan Medicine.  This mandala was used to explain the relationship between the diseases and their treatments.  This painting is a copy of the 16th Century Nepalese example and was painted with pure natural colors to preserve its healing power.

In 2002 I met my spiritual teacher who recognized my artistic ability and encouraged me to learn thangka painting.  Since then I have spent my limited free time in dharmic practice which included yearly retreats practicing thangka painting with Andy Weber.  I quickly realized through Andy's transmission the transformative power of thangka painting.  In late 2017 I quit my corporate career to pursue and explore thangka painting and other art forms.

Now I am devoted to learning thangka painting and train in the fine arts full time.  I still study with Andy and do multiple retreats a year as well as spend time in England with him at his studio.

For the last three years I have also had the great fortune to study with a Tibetan master Jamyong Singye in San Francisco.  Through his generosity and kindness I have continued to understand the depth and power of this tradition, and the necessity to practice it and share it in my daily life.

I am forever grateful to have the amazing fortune to learn from these two precious individuals as I continue my thangka practice.

About my teacher Andy Weber

The artist Andy Weber spent seven years living and studying the art iconography of Tibetan Buddhism under the guidance of accomplished masters in India and Nepal.

As a buddhist practicioner and teacher he is able to communicate the dharmic wisdom and language of the tibetan symbols used in this tradition to the western minds.  This is a rare gift.

His unique style of authentic images for visualization are highly respected not only by the growing number of Western Buddhists but also by Tibetan Lamas of all traditions, many of whom have commissioned his work. His paintings can be seen in Buddhist centers and temples throughout the world including the Potala Palace in Lhasa and his images have become well known and popular through numerous publications.

With over 35 years of experience Andy Weber and his students offer their artwork, their services, and their experience to the wider Dharma community.  Andy travels the world yearly teaching students and currently resides in northern England.

About my teacher Jamyong Singye

Jamyong Singye was born in remote Eastern Tibet.  At six years old he fled Tibet for North India to Himachal Pradesh, and entered the Sonada Monastery.  At 19 he studied under renowned Thangka artist Ge Ga Lama for over a decade.

Having devoted three decades to painting and lecturing extensively around the world, his entire life has been a journey to express his living truth. He was one of ten featured artists selected for 2014 UN Global Peace Campaign Billboards, showcased in SF, CA. His distinctive works, first collected in the East, gained a devoted following in the West. His art is now owned by some of the world’s most accomplished individuals and sophisticated collectors.

His numerous publications have aided the understanding of the thangka arts practice and are some of the most highly regarded texts available.

Singe currently resides in San Francisco where you will find him painting, writing, lecturing and teaching.

Message me on WhatsApp

Please contact me with any questions or to talk art :) Payment for gift shop items can be made via Paypal or Venmo. Message me for account info and desired products. Messages returned within 2 hours and orders processed within 48 hours. Thank you